(China.com.cn/WANG Lin, JIANG Xinyu) On September 8th, 2018, the 2nd Taihe Civilizations Forum initiated by the Taihe Institute was held at Grand Bay Hotel in Miyun District, Beijing. At the session on Advanced Technology, prestigious experts and scholars in political, academic and business communities gathered to discuss the trend of science and technology and the ethic enigma in the future. Top experts and scholars in the industry, including Ivo Josipovic, Former President of the Republic of Croatia, WANG Guangxi, Managing Director of Lenovo Capital and Incubator Group, FEI Lianghong, Chief Adviser of Cloud Computing Technology at AWS, YIN Ye, CEO of BGI Genomics Co., Ltd., conducted an in-depth discussion on the latest development trends and applications of life sciences and artificial intelligence, as well as the accompanying social ethical issues. 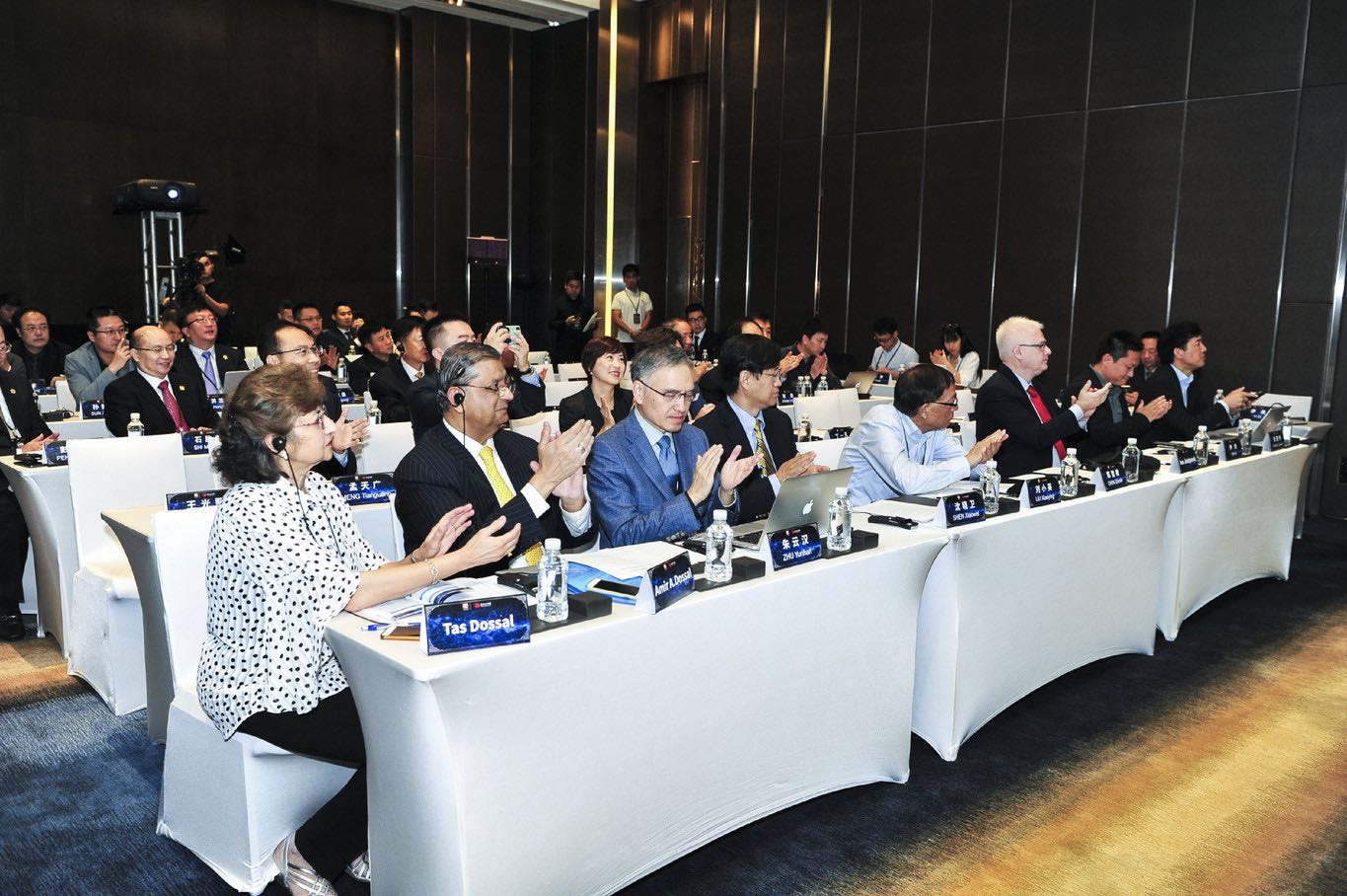 The frontier science and technology is developing rapidly with strong momentum

The key to the sustainable development of future human society lies in the thorough understanding of future. Grasping the latest technological development trends and understanding the most cutting-edge technology applications are the premises for the construction of future scientific and ethical culture. 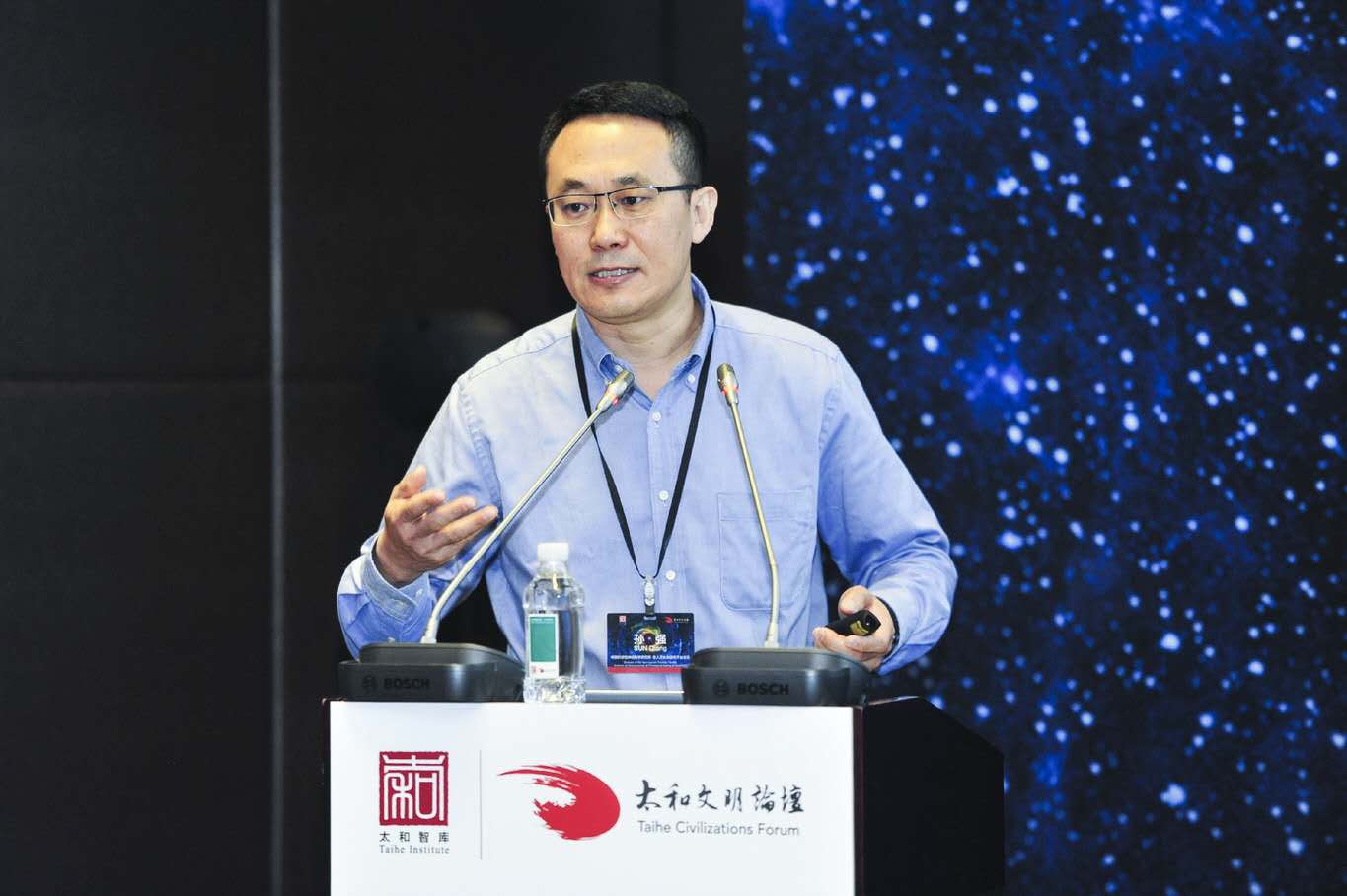 Professor and Director of the Non-Human Primate Facility of Institute of Neuroscience at Chinese Academy of Sciences, SUN Qiang

Under the topic of “The Latest trends, applications and implications for the development of bioscience and artificial intelligence”, SUN Qiang, Professor and Director of the Non-Human Primate Facility of Institute of Neuroscience at Chinese Academy of Sciences, first gave a speech entitled “Construction of Non-Human Primate Model Animals”. He elaborated the outcomes of non-primate animals research, which proves the outstanding achievements China has made in constructing non-primate animal models. Mr. SUN believed that China has mastered a non-human primate somatic cell cloning technology. In accordance with the ethics of experimental animals, it could generate a better non-human primate model with completely consistent genotype, which could help create cheaper, more effective drugs to benefit the humanity. 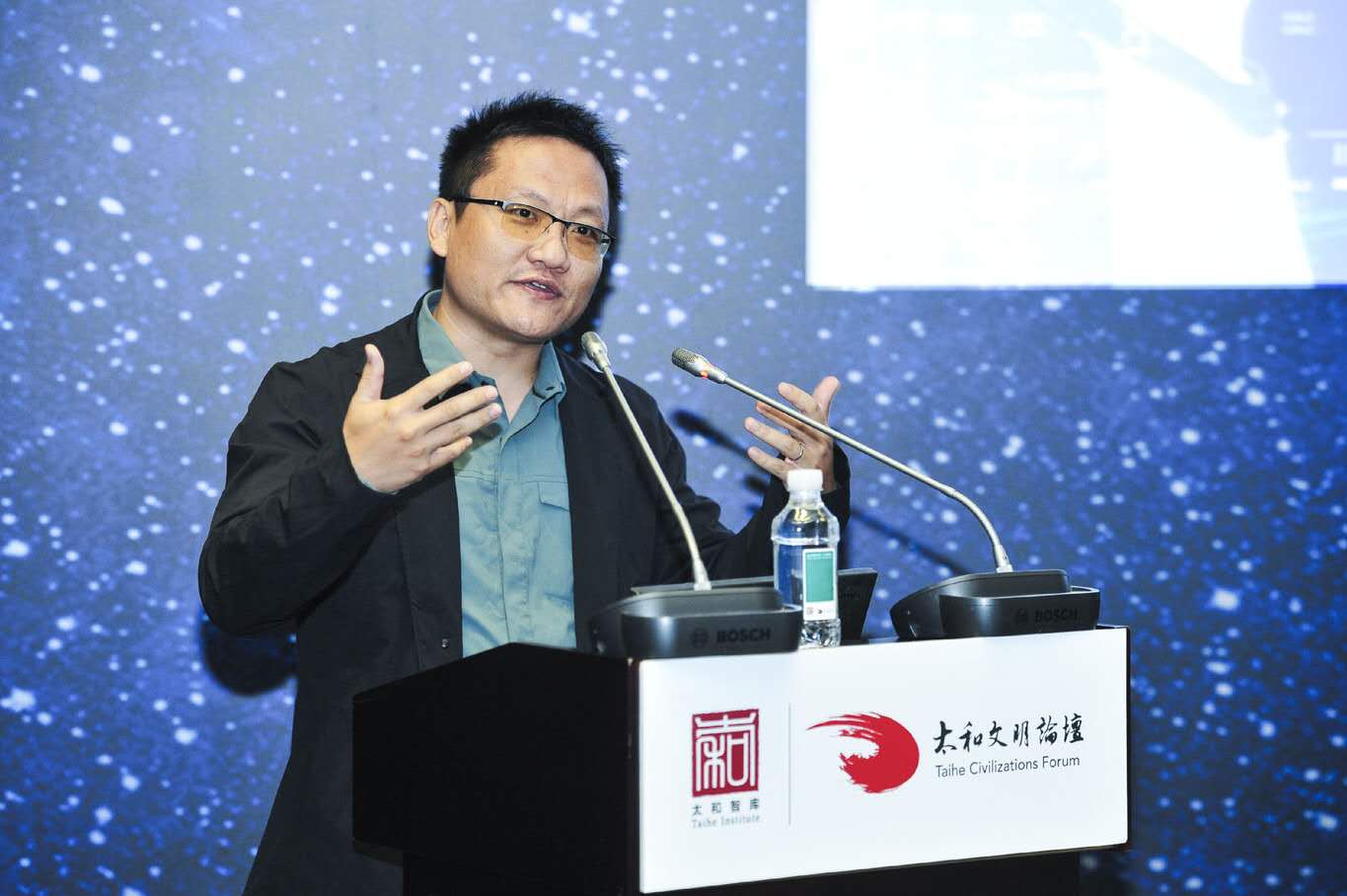 YIN Ye, CEO of BIG Genomics Co., Ltd., gave an introduction of the mysteries of human genes and proved with data that China has taken a leading position in the world in terms of gene technology and gene sequencing technology. Mr. YIN also pointed out that the "accurate effect" and "low price" of China's current genetic technology application would stay out of reach for other big countries in the world, which may drive revolutionary changes in the medical field. Meanwhile, Mr. YIN mentioned as well that the international competition for human genetics has reached a fever pitch. With genetic safety and gene information leakage events sounding the alarm for us, the protection of human genetic information urgently needs to be improved with our attention. 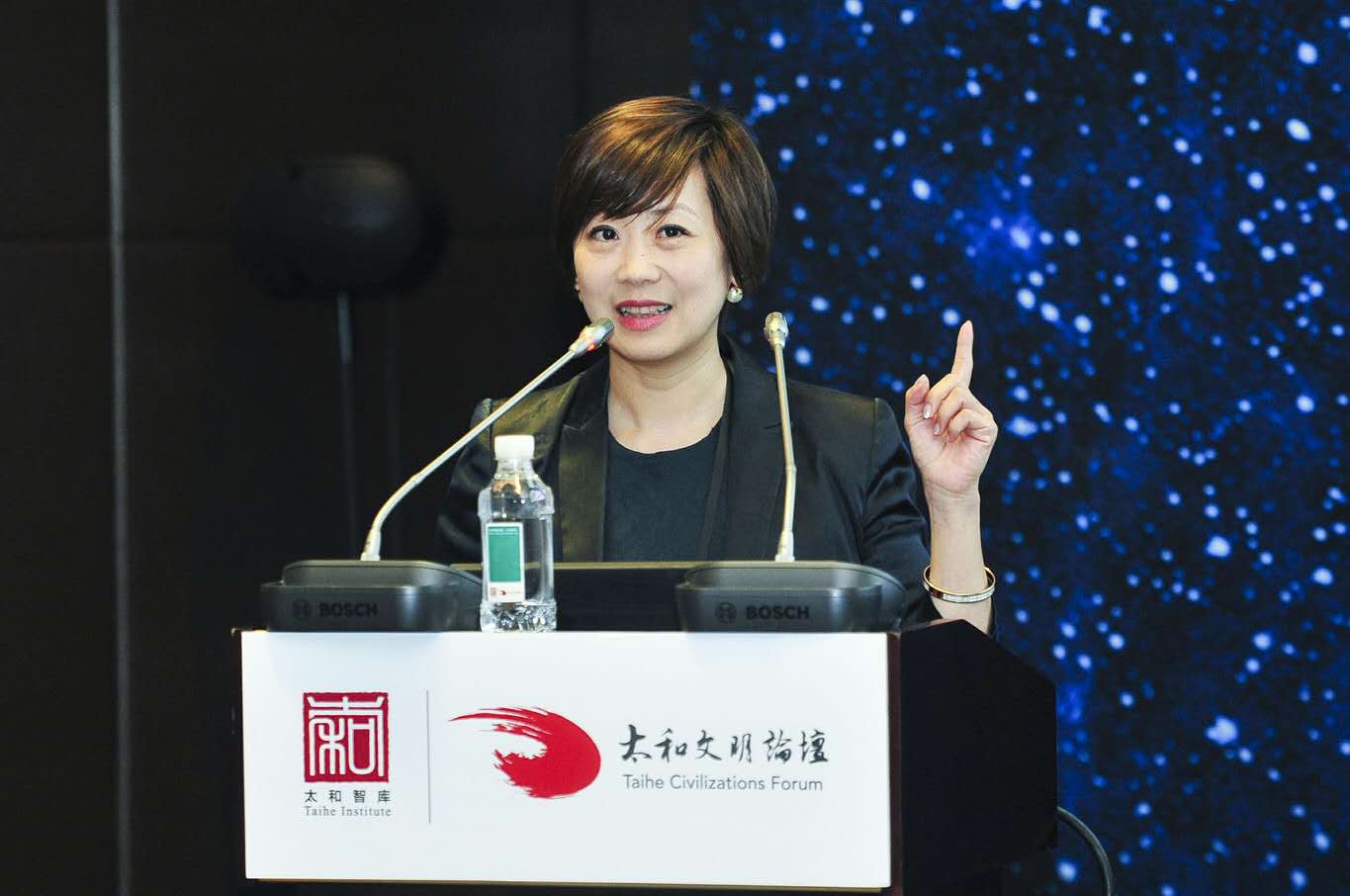 Combined with Google Artificial Intelligence in the case of agricultural disease prevention, life sciences and health diagnosis, Annabel Lin, Vice President of Google China, proposed that the future AI technology will be at our fingertips and bring well-being to human society. At the same time, she also introduced and advocated the development principles of Google's AI technology. 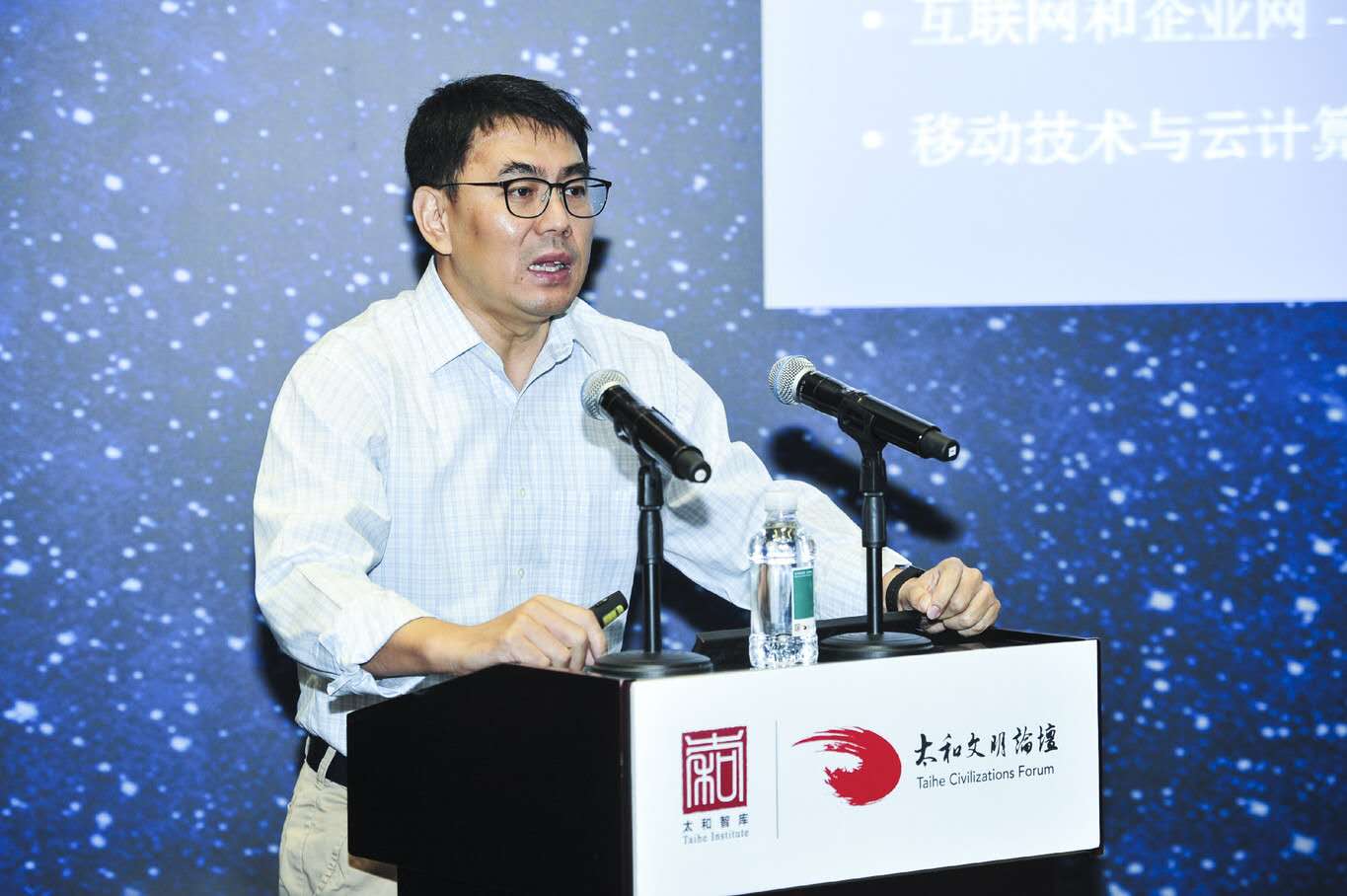 FEI Lianghong, Chief Adviser of Cloud Computing Technology at AWS, gave a speech entitled “The New Wave of Artificial Intelligence Driven by Cloud Computing”. Through the case of UBER autonomous car causing casualties, he threw out a question for people to consider: Will the artificial intelligence bring us happiness or harm if we rush to apply the immature AI technology into life? Mr. FEI said, we have gone through many disruptive changes brought about by technological development, and every emergence of new technology indicates a kind of disruption. Although at the beginning the technology seems to be immature, when the critical point comes, it could bring enormous and disruptive changes to the whole industry as well as the whole world, which has been proved by many previous cases. 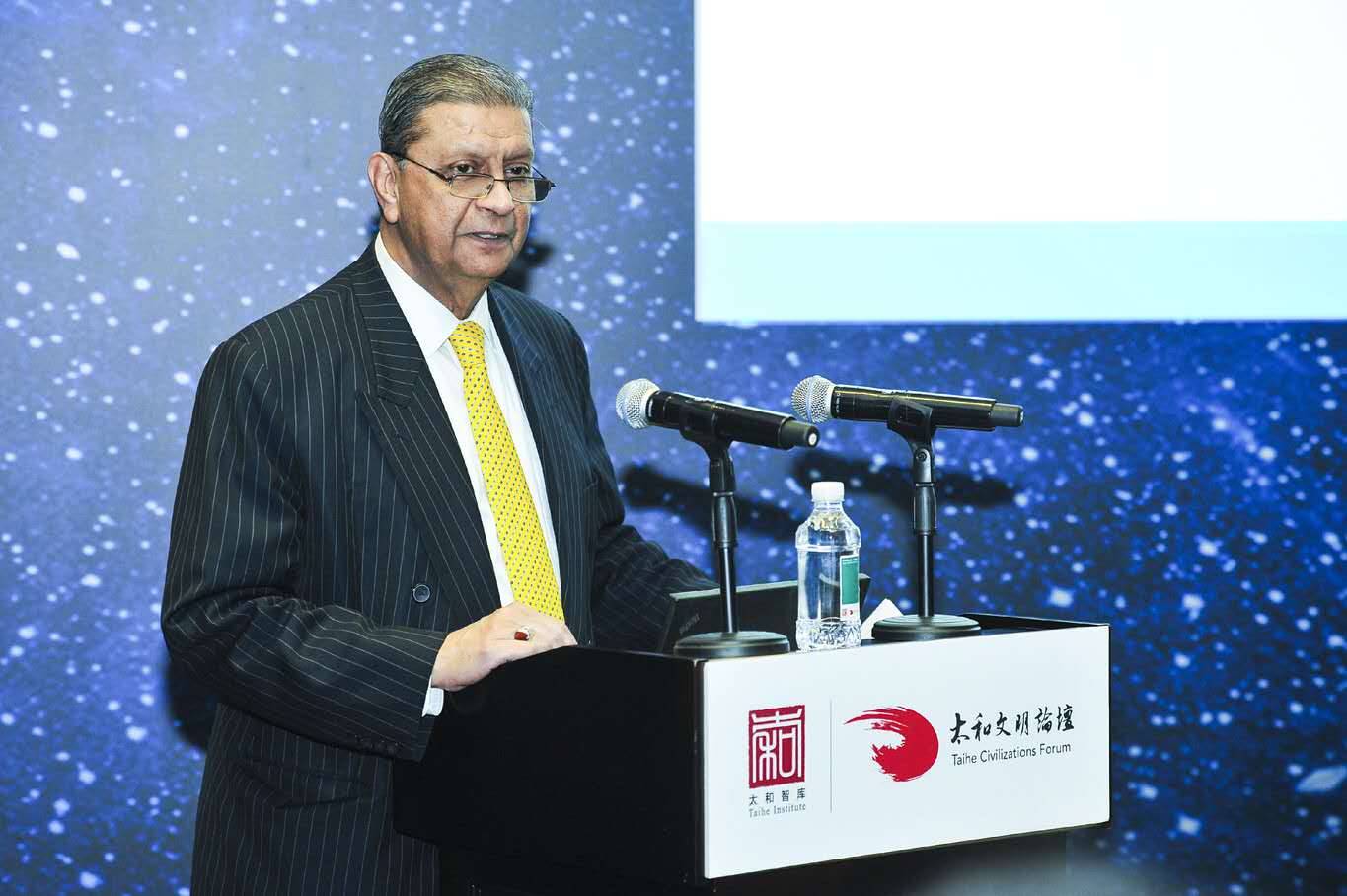 Founder and President of the Global Partnership Forum, Amir A. Dossal

Amir A. Dossal, Founder and President of the Global Partnership Forum, talked about the blockchain technology, focusing on how to implement applications in such aspects as poverty alleviation, drug allocation, and education equality so as to achieve the UN's sustainable development goals. 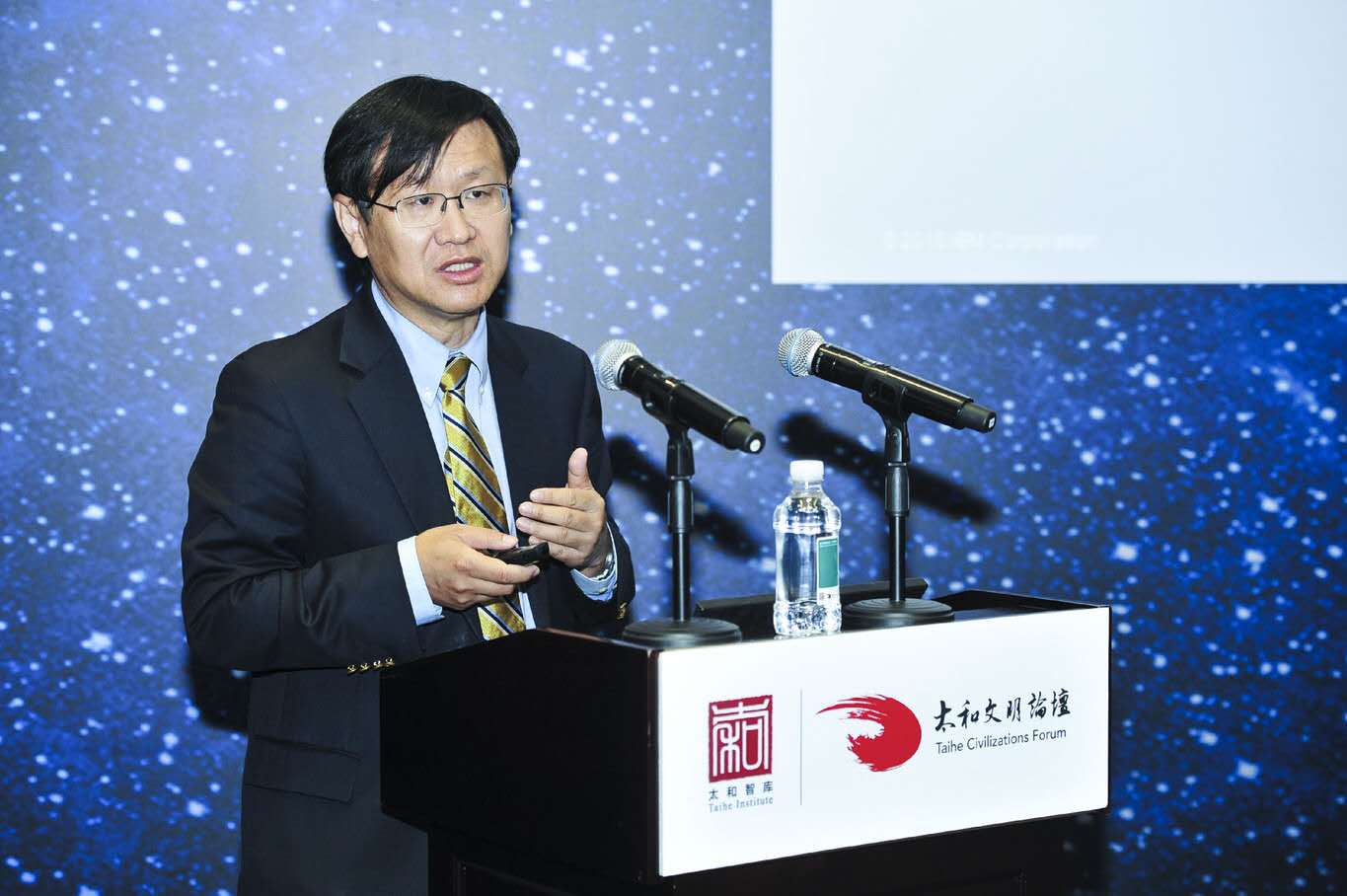 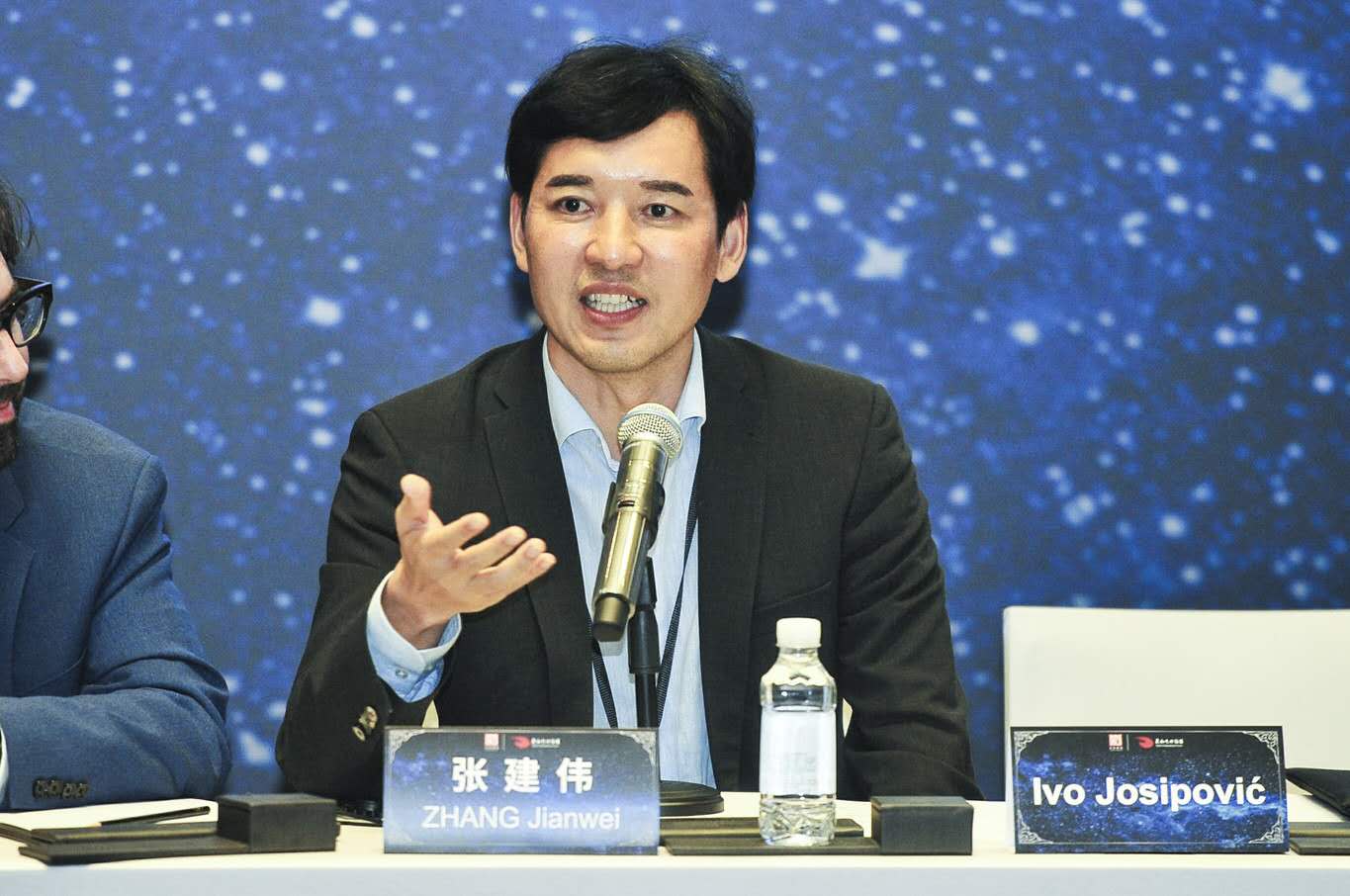 Director of Multimodal Technology Institute of the University of Hamburg, ZHANG Jianwei

ZHANG Jianwei, Director of Multimodal Technology Institute of the University of Hamburg, said that in the future, artificial intelligence will offer us human beings assistance in many fields and scenarios. However, it will also bring challenges to us, or even replace humans. He hoped that in the future, artificial intelligence can really help humans solve problems. We could choose priority-funded application scenarios and limit its application in dangerous scenarios through cross-border cooperation.

Through speeches and discussions , the experts came to the same conclusion: since the beginning of the 21st century, life science and technology and artificial intelligence have developed rapidly, constantly changing the production method and lifestyle of human beings. Life sciences, especially genetic engineering technologies, will not only facilitate the revolution in medical care, but also have a direct impact on human reproductive inheritance. Artificial intelligence will make breakthroughs in the fields or aspects where human thoughts are restricted and greatly improve labor productivity, which means a large number of non-creative jobs will gradually be replaced.

Human beings are currently experiencing a new round of technological change. While the rapid development of science and technology promotes the development of society, questions concerning existing social ethics also arise. “How should humanity create a common value and build scientific culture and ethics to ensure that the development of science and technology could ultimately benefit mankind” is a major concern of the Taihe Civilizations Forum’s Session on Advanced Technology. From their respective fields of expertise, participants boldly asked questions about the future development trend of science and technology: How to define the full responsibility when the AI product causes property damage or casualties? Who will benefit from digital assets, the most precious asset of the 21st century? Can we really usher in a shared society with the help of these new technologies and deal with the polarization of wealth? How to prevent the threat of all new technologies, especially digital technology, artificial intelligence, to the fundamental problem of existence of our human being? 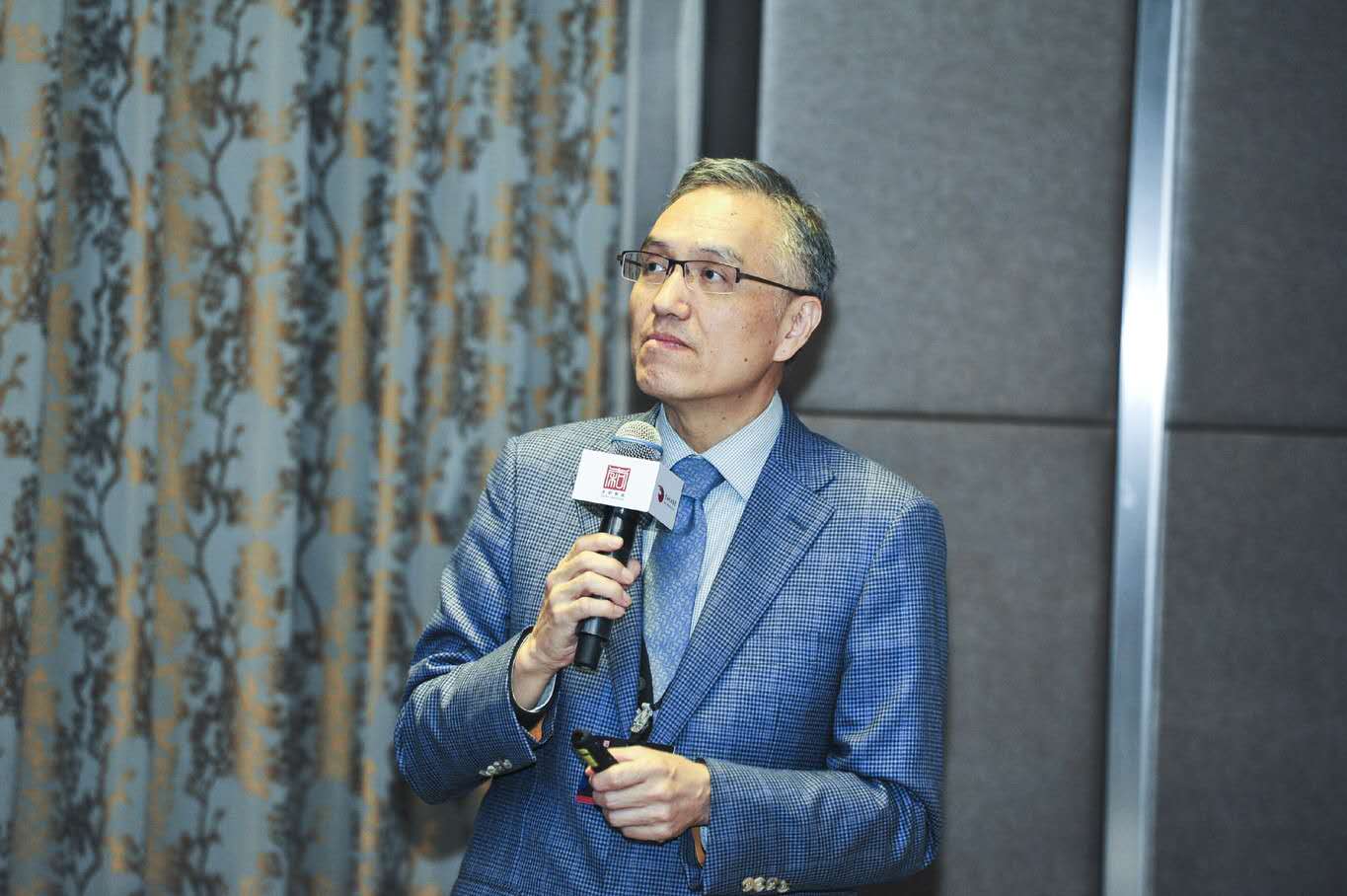 ZHU Yunhan, Professor at Department of Political Science at National Taiwan University pointed out: “Human society is at a cross road of history. In the future, the development of science and technology may bring us an extremely distributed society whose condition might be more serious than today.” To build up a society of peace and happiness, we first need to establish a new social contract to embrace the advent of digital society or digital economy in the 21st century; we should prevent the monopolization of digital assets, prohibit the misuse of personal data, and establish the collective ownership of digital assets. In addition, it is essential to figure out the relationship between technology and social ethics, and clarify the boundaries of power and responsibility between them on the basis of the correct overlooks on the world, life and values. At the same time, it is also required to establish a multi-level long-term mechanism to adjust the relationship between technology and ethics, in which the technological methods will be adopted to control science and technology. China is currently executing national big data strategy and national artificial intelligence strategy, thus, from the perspective of the institutional framework and institutional needs, data legislation should be taken into consideration, including areas such as privacy protection, the establishment of big data decision-making capabilities, data governance systems, and so on.

China should take the major-power responsibility, leading the future development of science and technology

Experts of the forum believed that, with a history of 5,000 years and profound historical and cultural heritage, the Chinese civilization has made significant contributions to the scientific and technological progress of mankind. With the rapid development of the economy, China's science and technology also witness significant improvement, taking the world's leading position in certain areas. In the future, China should make greater contributions to the development of human science and technology. Experts and scholars of the forum believed that China's development and prosperity are irresistible. Along with the continuous improvement of China's international influence, the presentation of a responsible major-power international image could not only facilitate the process of national rejuvenation and prosperity, but also make contributions to the world. Therefore, it is necessary for China to establish a scientific culture based on human social ethics in the future. 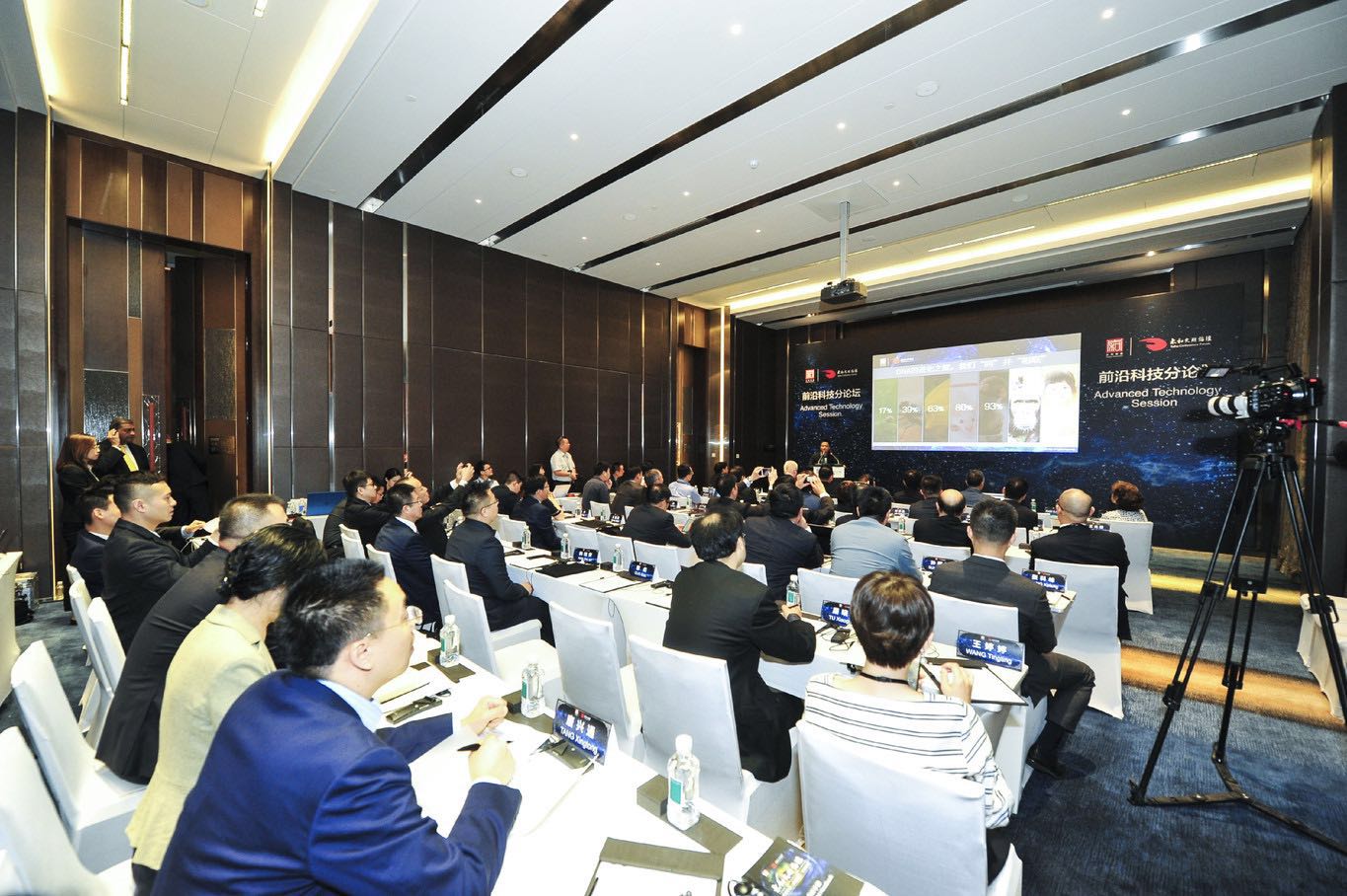 Einstein once said: “The significance of first-class figures to the times and historical processes may be greater in terms of their moral qualities than in terms of pure intelligence.” As a responsible major power, China must bring benefit to both itself and the world. In the future, China should standardize its own development blueprint, update the scientific culture against the backdrop of scientific and technological revolution, and establish a solution mechanism for science and technology with Chinese characteristics to share development dividends with other countries.

Through the discussions and communications, the experts and scholars from different fields have provided valuable suggestions for solving the contradictions between future technological development and social ethics, and reached a consensus on the viewpoint that “human social ethics is the framework and bottom line for the Advanced science and technology development.” Undoubtedly, under the current context of the rapid development of science and technology, this sentence represents the birth of a new scientific view. It advocates the construction of an organic connection between nature and science as well as a bridge for communication between scientific culture and humanistic culture, which could connect technology with ethics closely and offer presupposition for the harmonious development of technology and ethics.