I have often been asked two questions, of which one is "Why did you start learning Chinese 50 years ago?" and the other is "Do you have confidence in the future of China- US relations?" The answers to both are quite clear. I started learning Chinese 50 years ago because I believed in the past and still do now, that the peace and stability of the world depend in part on the United States' understanding of China. The answer to the second question depends on what all of us we will do for the development of China-US relations.

Looking back to the time when the National Committee on United States-China Relations was newly established in 1966, the United States was caught up in the Vietnam War. At that time, U.S. called China "Red China", while China called U.S. "A Declining Imperialist". Leaders of the two countries, Chairman Mao Zedong, Premier Zhou Enlai, President Nixon and State Secretary Kissinger, agreed that the Soviet Union was a common challenge to both China and U.S., and the situation of absence of diplomatic relations between the two countries should come to an end. It was indeed necessary to establish mutual trust between the governments and non-governmental organizations of the two countries. However, the 22-year separation had brought serious misunderstandings and concerns to both sides. How did the two sides break this impasse? I think it is to a great extent personal exchanges that have contributed to this historic breakthrough.

During the period of China-U.S. relations, "Ping-Pong Diplomacy" changed the two sides' attitudes toward each other. Ping-Pong initiated people-to-people exchange between the People's Republic of China and the United States of America. Moreover, due to the important political and diplomatic events of 1971, it was also known as the ping-pong diplomacy period. At that time, diplomatic ties between China and the West had been suspended for more than two decades. Therefore, it was surprising when the U.S. table tennis team was invited to visit China after its participation in the Tokyo World Table Tennis Championships. This invitation launched the establishment of diplomatic relations between China and U.S. Chairman Mao Zedong and Premier Zhou Enlai paid close attention to this, which led to this great shock at that time! After all the formal approval procedures had been finished, the Americans, finally, were able to visit China. The Time magazine called the visit "Listening to the sound of ping pong", and many media reported it. During the visit, through contact and exchange between young people of the two countries, some of the previous misunderstandings and bias began to melt slowly. This was a significant start and laid a very important foundation for President Nixon's visit to China. During the same period as this visit, U.S. announced the termination of its 20-year trade embargo on China. In July 1971, Nixon announced that he would officially visit China in February 1972, which marked the first trip to China by the U.S. President. The U.S. table tennis team invited the Chinese table tennis team to visit U.S. in 1972 and took a special plane together to participate in the competition. As we all know, the Chinese table tennis team performed with outstanding brilliance and dominated the competition, while the
U.S. table tennis athletes also improved their standing in their own hometown.

Over the subsequent 40 years, China and the United States carried out personal exchanges in more than 900 fields. In 1973, the U.S. track and field delegation came to China. Until that time, many Chinese people had believed that the United States was a lazy capitalist country, but when the Chinese people saw U.S. athletes' efforts, they changed their impressions of Americans. Similarly, the Chinese gymnasts performed well in competition in the United States, even though there was no sound due to a problem with the cassette, and the Americans were impressed with the professional ability and spirit of Chinese gymnasts. Here, I also want to talk about Mr. Xi Zhongxun, who visited the U.S. in 1980 as the Secretary of the provincial party committee, and also had an important influence on the development of China-U.S. relations.

In my view, when the China-U.S. relations face obstacles such as the trade issues and the North Korea issue, personal exchanges become more important than ever. In fact, personal exchanges have always been the lubricant of the two sides' relationship, I can't think of any event more influential to the relationship and mutual impressions between China and U.S. in the past 20 years than the 2008 Beijing Olympics Games. At the opening ceremony of the Beijing Olympic Games, Yao Ming, as the standard-bearer, joined hands with a nine-year- old orphaned by the Wenchuan earthquake and entered the arena. We were all moved by that scene. The other thing that the Americans were touched by was Liu Xiang's withdrawal due to his injury. When his coach tearfully told the media about Liu's severe injury, many Americans were touched by the interview. Now, some Americans are afraid of the rise of China. However, these two events are worth a thousand words, which enable many Americans to better understand that the people of the two countries are actually the same. 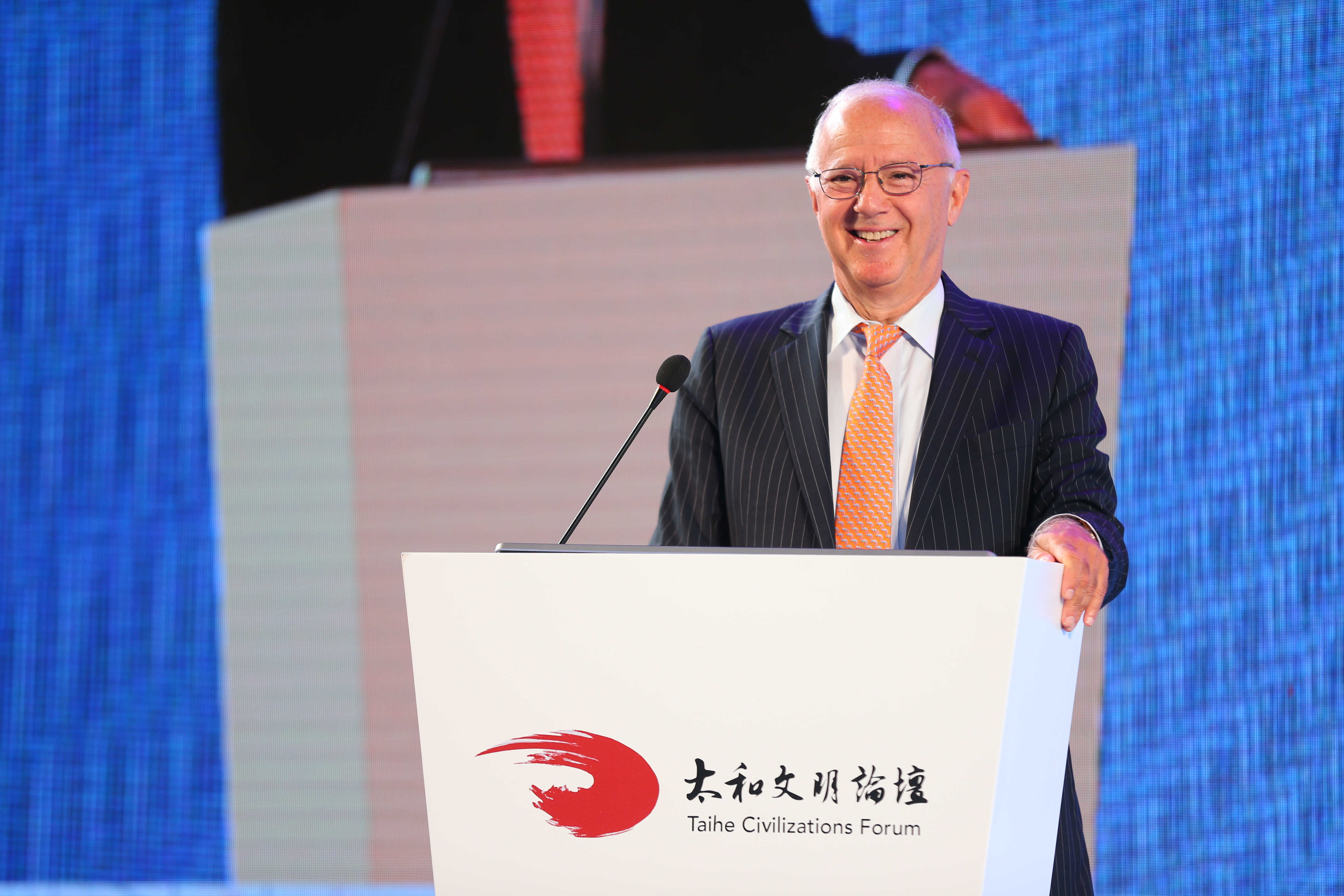 At last, I would like to share with you about why I am confident about the future of China-U.S. relations.

I recently visited Dayton, Ohio, a small city in the mid-west of America, where my brother lives. Because of global competition and technology transfer, most of the factories in Dayton have been closed down and the economy is in a great depression, but on that day I saw the hope of Dayton's rise. A Chinese company built one of the nation's largest automotive glass production sites in Dayton, which directly employs more than 2,000 Americans, and 200,000 Americans indirectly participate in China-U.S. trade relations. I believe that more and more Americans will consider it is a good thing to develop China-U.S. relations.

In another example, a few months ago I returned to my alma mater, Harvard University, to attend a forum organized by Chinese students, in which more than 200 Chinese students participated in the activities. But when I was studying at Harvard 50 years ago, there were only 12 Asian students in the class. At the forum, I said I sincerely hope that one day the President of the United States can understand China and speak Chinese. All the students stood up and cheered at the same time. At that time, I realized that the 325,000 Chinese students studying in the U.S. and the 25,000 American students learning in China will become a bridge connecting China and U.S. as well as the world, and they will also further deepen the mutual understanding between China and U.S to help China-U.S. relations become more solid.

Although there are some obstacles between China and U.S. and some people, for certain purposes, may obstruct us from establishing constructive relations, I am still very optimistic about the future of China-U.S. relations.

All the China-U.S. exchanges we talked about today are the results of the joint efforts by friendly people from both China and U.S. Through the efforts of all parties and various exchanges, we have deepened the mutual understanding between China and the U.S. and promoted the development of bilateral relations. The difficulties are temporary. I believe our efforts will bring a better future for China-U.S. relations!