The rest of the world moves towards chaos, while China chooses peaceful rise

(i)Instability, uncertainty and unpredictability have become the new norm for international relations


As we all know, the world today is undergoing major changes, major adjustments and major transitions, with an unstable international situation and world economy, geopolitical order conflicts and increasingly prominent global problems. After nearly 40 years of reform and opening up, China has never been closer to the great historical goal of "National Revival". The Chinese are proud and excited, and the world is also shocked, but at the same time, we should be acutely aware that China's surrounding environment is facing profound and complex changes. The chaotic world situation and the complicated and ever-changing environment have brought increasing pressures and challenges  to the comprehensive advance of China's modernization and construction.

Chaos in today's world began with the drastic changes of the Soviet Union and Eastern Europe in the late 1980s, which led to the collapse of the Soviet Union, the dissolution of the Warsaw Treaty Organization, the eastward expansion of the EU and NATO, and significant changes in the geostrategic environment in Europe. Today, more than 30 years later, this violent, drastic and profound regional change has not yet ended completely. The Ukraine crisis is a striking example, and some countries may be divided again.

In the early 1990s, as the cold war was drawing to a close, the United States launched its first Gulf War, and operation "Desert Storm" caused major turmoil in the Middle East. After the new century began, chaos in the Middle East spread far and wide; Libya, Iraq, Yemen and some other countries have been deeply divided; the humanitarian disaster caused by wars in Syria continues to spill over, but the international community has no solutions to deal with these.

Now, the western world faces a mountain of problems. Since the EU's sovereign debt crisis erupted in 2008, internal conflicts have deepened and the rift has further deepened, with British announcing its resignation from the EU. The internal disputes in the EU continue to grow and the integration process has been seriously frustrated. Internally, extreme xenophobia and populism have bucked the trend. The aggravation of polarization and anti- integration waves in the United States have caused the process of economic globalization and the common progress of human beings to undergo undue interference and shock. It is heart wrenching.


What should we do in such a chaotic world? In the face of this century's question, the Chinese Communist Party and the Chinese leaders have made objective and rational responses and delivered a satisfactory and widely-welcomed answer by taking calm observations and measures and considering the situation.

China-U.S. relations are the top priority in great-power diplomacy today. President Xi Jinping attaches great importance to China-U.S. relations. Shortly after taking office, he proposed that China and the United States should build a new type of great-power relations featuring non-conflict, non-confrontation, mutual respect and win-win cooperation. He has put forward specific suggestions and propositions on the future development of China-U.S. relations on different occasions. Four of them are particularly worthy of our attention,i.e. "enhancing mutual trust and grasping the direction; respecting each other, increasing common interests and dissolving differences; equality and mutual benefit, deepening cooperation; focusing on the people and deepening friendships".

Although significant changes in domestic and foreign affairs of the United States have taken place since Trump came to power, China has still taken a constructive attitude, continued to strengthen communication with the United States, guided the relations between the two countries to get rid of the interference of irrational thinking and return to a mature development track integrating cooperation and competition, and made efforts to drive the U.S. government to accept the principle of the new type of great-power relations proposed by China. When Tillerson, the US Secretary of State, visited China, he defined China-U.S. relations as "non-conflicting, non-confrontational, mutually respectful and a win-win cooperation". This is exactly the connotation of President Xi Jinping's "New type of great- power relations between China and the United States".

On the Taiwan issue, Trump, at the beginning of taking office, has talked on the phone with Tsai Ing-wen, and has once violated China's bottom line by deviating from the conventional policy. However later, he reiterated that he would abide by the "One-China" policy. In the face of the new variables in China-U.S. relations, China adheres to the principle of "fighting without breaking up" to unswervingly safeguard its national core interests and firmly grasp the general direction of healthy development in relations between the two countries. This standpoint will never change.

China-Russia relations play an important role in today's world. Both sides confirmed that the central task of the development of China-Russia relations is to increase political mutual trust, comprehensively expand pragmatic cooperation, and strengthen cooperation between the two countries in the international community.It is not a coincidence that Russia was been the first country Xi Jinping visited after he became President. At the Russian Institute of International Relations, President Xi Jinping made a comprehensive, systematic and in- depth elaboration of his basic understanding of some major issues in today's world, and expounded China's basic views and propositions on foreign affairs for the first time. In 2014, the Sochi Winter Olympics was boycotted by the West. President Xi Jinping made a special trip to attend it, with the purpose of showing the international community the stability and reliability of the strategic partnership of cooperation between China and Russia. After that, China and Russia signed a series of documents to deepen the strategic partnership of cooperation. In 2015, the leaders of both sides led troops in attending the high profile "5.9 military parade" in Moscow and the "9.3 military parade" in China, which further showed the international community the new quality and level of the China-Russia strategic cooperation partnership, as well as the broad prospects for the comprehensive cooperation between China and Russia as emerging powers and friendly neighbors. 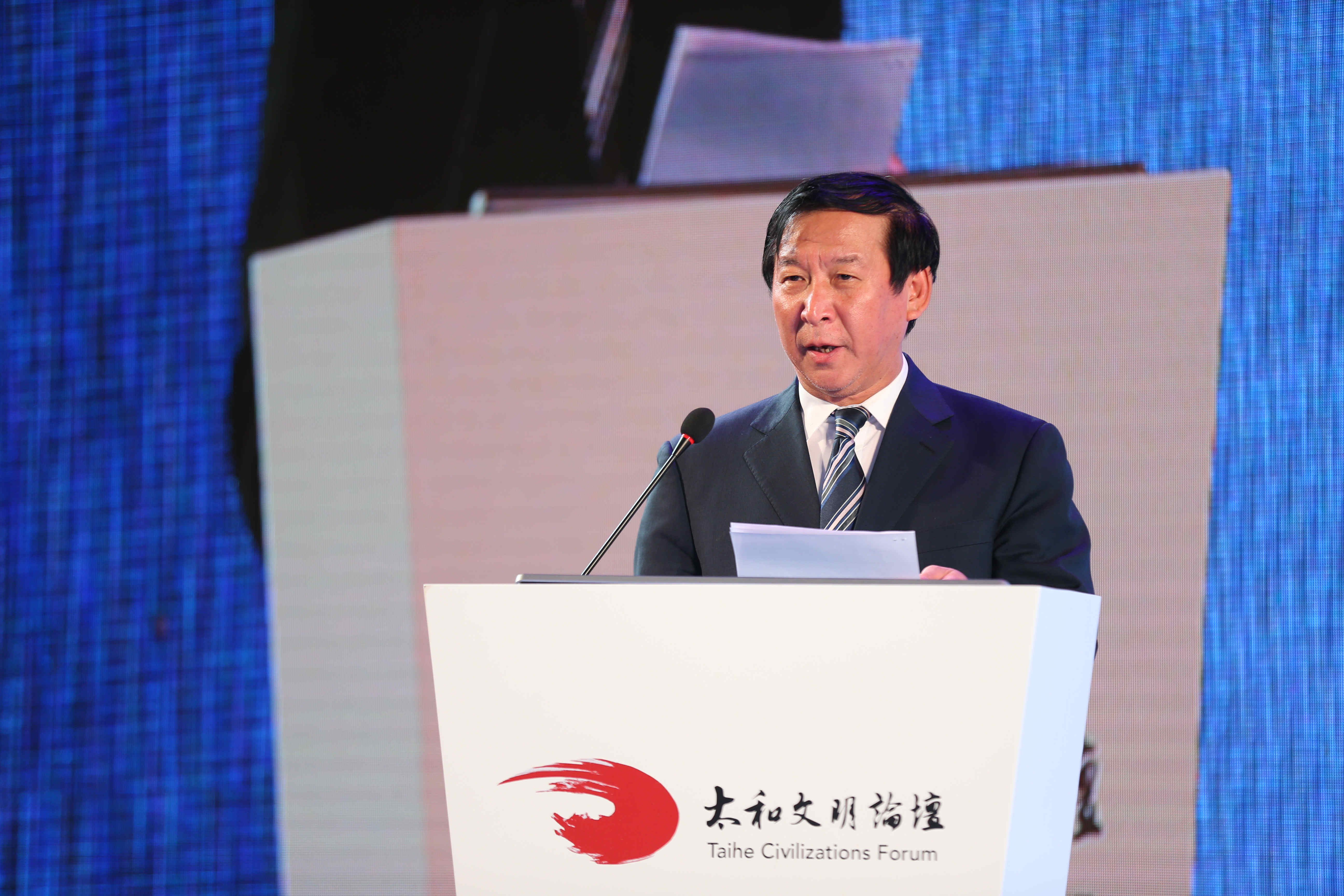 In March 2014, President Xi Jinping visited Europe a year after he became the president, and visited European Union headquarters. China and the European Union have jointly issued the Joint Statement on Deepening the China-EU Comprehensive Strategic Partnership for Mutual Benefit and Win-win Cooperation, with the purpose of deepening China-EU relations based on the principles of equality, mutual trust and mutual respect, to jointly create four major partnerships in peace, growth, reform and culture, and the two sides put forward the short-term and medium-and-long-term goals for the development of their partnership. These are the new contributions to the stable development of international relations.

While the EU is facing numerous challenges and uncertain prospects, China takes a firm position in continuing to firmly support the integrated construction of the EU and to expand cooperation between China and the EU in various fields such as high and new technologies, infrastructure and finance. The pace of China-EU cooperation is accelerating.

China attaches great importance to relations with great powers and places more emphasis on relationships with neighboring countries. The central meeting on foreign affairs work held in November 2014 was an especially important meeting of the Chinese leadership since the founding of new China, centering on neighboring affairs and neighboring diplomacy.

President Xi Jinping has visited other Asian countries many times and attended multilateral activities held in neighboring countries and regions, with the purpose of building a community of interests and a community of responsibility in Asia and promoting the construction of a community of shared future for mankind. Although there are a lot of problems in Asia, and China is facing increasing risks, pressures and challenges, the controllable and plastic features have not changed. China has the ability to lead the sound development of its regional diplomacy. The policy of friendship and partnership with neighboring countries as well as the good-neighborly and friendly policy, i.e. creating an amicable, secure and prosperous neighborhood, and especially the neighborhood diplomacy concepts of amity, sincerity, mutual benefit and inclusiveness, proposed by President Xi Jinping have gained more and more recognition. China's unique role in the Asia-Pacific Region will eventually be recognized and accepted by the neighboring countries and the entire international community.


During his trip to Central Asia and Southeast Asia in September to October 2013, President Xi Jinping put forward the initiative of "Expanding China's cooperation with relevant countries to jointly build the Silk Road Economic Belt and 21st Century Maritime Silk Road". This initiative, which accords with the historical and social trend of economic globalization, cultural diversification and social informatization, aims to promote the orderly and free flow of economic activities throughout the world, allocate resources efficiently, drive in-depth integration of markets, enable countries along the routes of the Belt and Road to coordinate their economic policies, and create a new pattern and framework for regional cooperation that is open, inclusive, balanced and beneficial.

The Belt and Road focuses on Policy Coordination, Facilitates Connectivity, Unimpeded Trade, Financial Integration and Personal Exchange. Directly driven by China, the international community has increasingly and widely supported and participated in the construction of the Belt and Road. Now the Belt and Road has not only become a necessity for meeting China's expansion and deepening its opening to the outside world, but has also generated a powerful momentum for achieving inclusive development, cooperative development, integrated development and joint development throughout the world. It is the first initiative of the new century with this kind of inspirational influence in the world today.

China has established the Silk Road Fund for the promotion of the Belt and Road, initiated the Asian Infrastructure Investment Bank (AIIB), and set up many "corridors". These initiatives and plans are becoming reality. The China-Europe Block Trains connecting China with Europe are being built into a world-renowned logistics brand with international competitiveness and a good reputation. The initial gains and achievements of the Belt and Road Initiative have far exceeded our expectations. The evaluation of the Belt and Road from the West, including U.S. President Trump, has become more pragmatic, rational and positive. For countries such as the U.S., Japan and the EU, it is quite a realistic choice to participate in the construction of the Belt and Road. China has always had an open attitude and is willing to push the Belt and Road to the whole world.

The Belt and Road Forum for International Cooperation was successfully held in Beijing in May 2017. President Xi Jinping elaborated on the historical origins, objectives and principles of the Belt and Road Initiative as well as the historical significance of carrying forward the Silk Road spirit in his address. The international community has also become more aware that the Belt and Road is essentially an innovation by which China is guiding neighboring countries to carry out mutual beneficial cooperation, drive the integrated development of the world, and jointly open up the roads to peace, prosperity, opening, innovation and civilization, and it is a new way and the realistic choice to lead the international community toward the community of common destiny.

Today, the Belt and Road Initiative has become a joint action by all countries in the world, especially developing countries, in cooperative development, inclusive development, integrated development and joint development. The Chinese nation in comprehensive rejuvenation will make its unique historical contribution to the cause of human progress.